Trainers, Niantic sent a new “First Strike” warning, and the Pokemon Go players are not happy with it – it seems like Niantic made a mistake with some accounts.

Many legit Pokemon Go players, including myself, are concerned about the latest ‘First Strike’ wave, as they’ve never used third-party apps and received the following warning notice: 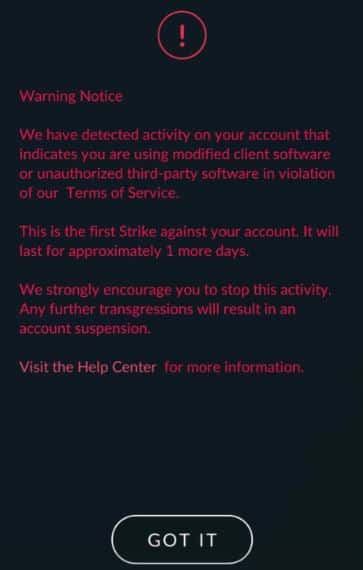 After reaching out to Niantic and sending them Trainer Nickname, they said the following:

Keep in mind that this is not a strike, just a reminder of our Terms of Service.

Now, if you read the message again, it clearly says that is the FIRST STRIKE.

If you have previously received a warning or suspension notice, you may see a new acknowledgment screen when logging into Pokémon GO. This is a one-time acknowledgment for previous violations and it doesn’t necessarily indicate a new punishment on your account.

There are a lot of Trainers who received the one-day soft ban, and it stays unclear what is the cause.

Have in mind that if you received this warning notice:

If the first strike is issued, you will see a warning message within the Pokemon Go app informing you that we have detected cheating on your account.

In addition to this warning, your gameplay experience may be degraded in the following ways for the duration of the warning:

You may not be able to encounter rare Pokemon in the wild. These Pokemon may not appear on the map or on the Nearby Pokemon tracker.
You may be excluded from receiving new EX Raid Passes.

We will contact Niantic once again and we expect to see a new, better explanation.