Today Cyberpunk 2077 developer CD Projekt released its financial results for the third quarter of 2019, related to the period between July 1 and September 30.

Below you can check out a table summarizing the relevant financial figures for the company.

As you can see, revenue increased year-on-year, while operating profit declined slightly, yet still remained firmly in the positive. 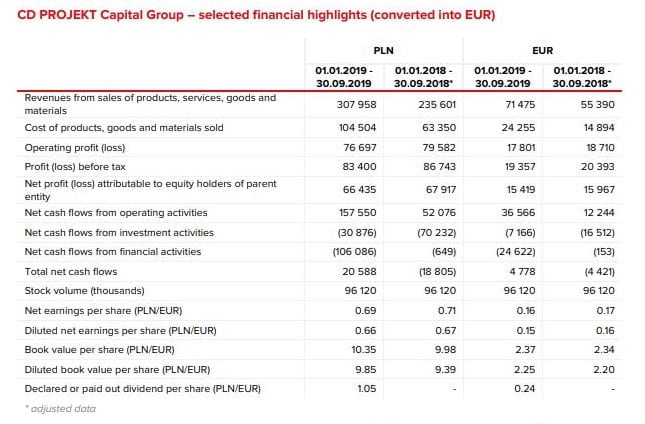 The press release included a breakdown of the major contributors to revenue.

The greatest contribution to the CD PROJEKT Capital Group’s revenues in the third quarter of 2019 was from Revenues from sales
of products, mostly comprising:

a) licensing royalties associated with continuing strong sales of The Witcher 3: Wild Hunt along with its expansion packs (Hearts of Stone and Blood and Wine) – sold separately as well as in the Game of the Year Edition bundle;

b) licensing royalties associated with digital distribution of  Thronebreaker: The Witcher Tales and in-game sales in GWENT: The
Witcher Card…